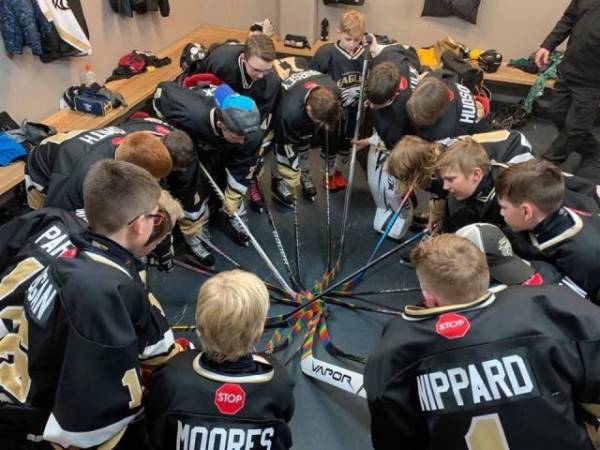 The 2019-2020 minor hockey season recently came to an abrupt end as we all focused our attention on more serious matters and doing the right thing for our community and loved ones in the battle against the COVID-19 virus.

The season will be forever remembered as the one that didn’t end; it just stopped. In any sport the end of season is marked by the excitement of the big win or the humble acceptance of losing despite one’s best effort. Inevitably, we all look back on the season and at some point ask ourselves or our kids, “Was it all worth it?”

In searching for that answer, we recall what stood out during the season. I for one, think back to the tremendous effort made by the Northeast Peewee C Eagles Team and their many supporters on their way to winning the Chevrolet Good Deeds Cup and $100,000 for their charity, the Rainbow Riders. Their bid was built around the $21,500 they had raised earlier for the Rainbow Riders. It was truly impressive to see how teams in the DJHL displayed such excellent sportsmanship towards them.

I also think back to the wonderful outpouring of financial and moral support shown one of our Peewee A players and his family after they had lost practically everything in a home fire during Stormageddon. Our player got a full set of replace gear and his family got much more than a cheque to help out with the basics; they got the friendship and kindness of the hockey community when it mattered most.

Speaking of Stormageddon, never in my eleven seasons of helping run the DJHL and its predecessor, the Tri-Com League, have I witnessed so many storm cancellations. It took the cooperation of all teams and member Associations to get through it.

Cooperation was also the name of the game when Paradise Minor Hockey and the Town of Paradise took pause in their ice schedule to host the Canadian Tire Para Hockey Cup. The event was an amazing success (record gate) under Don Dyke’s leadership and I was honored to serve under him. Simply put, watching world class para athletes, including our own Liam Hickey, entertains you and changes you. The event generated a $55,000 legacy fund for our sledge brothers and sisters. #Awesome

Competitive hockey, by design, rightly or wrongly, tags every player with a decision from the “hockey gods” as to what skill level they are at right now. We remind the top of the heap to be humble and to pass the puck more and give the “bubble players“ denied a spot in the much desired higher division the proverbial pep talk on overcoming adversity. This season, like many before it, had its share of highlight reel goals and saves. Once again, it also had a bunch of APs who proved they belonged and often improved the most. Watching that evolve never gets old.

No retrospective would be complete without mention of the volunteers who are the foundation of our League. Hockey is an exciting sport but the passion it brings out in folks is not always accompanied by reason. So we rely on our solid group of volunteers at the team level and on our Operating Committee to keep everyone in check. To that end, they do an admirable job. The DJHL is more than a League, it’s a brand and it’s because of their leadership.

As always, it has been a privilege to work alongside Steve Power this season. He’s made sports management his career and the DJHL is a better place for it.

It’s also a good-bye to Karen Bursey, who has served us well on the Operating Committee for many years and plans on moving on. Karen is a true community-minded individual and friend of the game through many tournaments.

Our game and the DJHL will return, and so will I. Here’s betting we’ll appreciate what we got a lot more when life returns to normal.

Be safe and be kind to one another.

Week 4 of Play-offs Trims the Pack